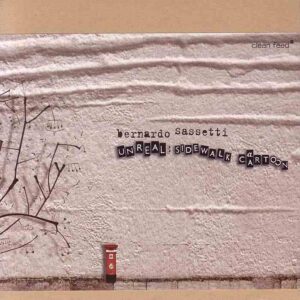 As with any conceptual work of art — in this case an improvised work — this record has several layers. In its essence this is a piano solo recorded live in concert. It is simultaneously lyrical and experimental, rare combination. It addresses dynamics of time and textural timbres, spontaneous preparations, and etamorphic melodic figures. The piano melds with a hort wave radio receiver in “Zul” and with four CD players projecting a montage of natural sounds in Zelub.” These techniques bring to mind the Avant Garde music and Fluxus movement of John Cage and his use of multimedia and interart (video, instalation, performance art) in some of his compositions. In the tudio the live recordings were remastered and anipulated to create new textures and structures preserving the original solo piano. This concept come from the so called “unrealized usic energy,” a theory developed by Lima Barreto with João Marques Carrilho. The idea is that, in the moment immediately before starting to improvise, the musician forms a purely mental investment of memory and intention, something of the metaphysical domain in which the music retains a dream-like flux. In Portugal, Lima Barreto is a legend for what he represents as a performer, writer and opinion maker and a political situationist. For almost two decades, from the end of the Sixties to the middle of the Eighties, his was the only voice in Portuguese newspapers and magazines that discussed free jazz, art rock, minimalism, musique concrete, and other avant-garde tendencies; today goes on with this project of cultural action. He also published books on subjects like history, philosophy, classification, terminology and aesthetics of the music comunication. His essay “Revolução do Jazz” nticipated “Free Jazz / Black Power,” by the French music writers Philippe Carles and Jean-Louis Comolli. An art historian who specialized in musicology, he transformed his theories into practice (concerts, records, videos). With Anar Band he was a pioneer in liveelectronics, with the project Telectu – still active today – he introduced minimalism, experimental rock, concréte and free improvisation to Portugal. Even if he played synthesizers at some moments in his career, piano was always his first love where he can be surprisingly romantic or spectacularly bold. “Zul Zelub” is the natural consequence of a life dedicated to music.