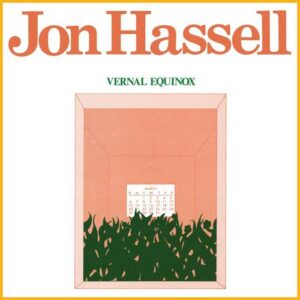 Composer and trumpeter Jon Hassell has been an elusive, iconic musical figure for more than half a century. He’s best known as the pioneer and propagandist of “Fourth World” music, mixing technology with the tradition and spirituality of non-western cultures to create what he termed the “coffee-colored classical music of the future.” In 1987 he joined with Farafina, the acclaimed percussion, voice, and dance troupe from Burkina Faso, to record Flash of the Spirit. While the album is a natural extension of those “Fourth World” ideas, and a new strand of Possible Musics, it also a distinctive outlier in the careers of both artists; an unrepeated merging of sounds whose influence still reverberates today.

The music that emerged was rich and groundbreaking, a move to transcend the boundaries between jazz, avant-garde classical, ambient and the deep rhythmic tradition embodied by Farafina. But of course, Hassell had been slowly blurring and ignoring such boundaries for years.

He’d served an apprenticeship with Stockhausen, worked with minimalists Terry Riley and LaMonte Young, studied Indian music under Pandit Pran Nath, and collaborated with artists like Talking Heads, Peter Gabriel and David Sylvian, as well as forging a path into ambient music, through an especially fruitful partnership with Brian Eno on the albums Fourth World, Vol.1: Possible Musics and Dream Theory in Malaya.